DMNW On The Road: Getting Shpongled in NOLA The theme of our weeklong New Orleans adventure was “why not?!” and nothing proved this more true than our last night in the city known as “The Big Easy.” Our original plans were to have one last dinner in a city that had been full of nothing but delicious foods that continued to amaze, but much like the rest of the week had gone the night took an entirely different direction. We caught wind that Shpongle was going to be playing at the Civic Theatre and quickly decided that dancing was more important than a fancy dinner out.

The Civic is a beautiful theatre that reminded us of the Showbox back home. It was built in 1906, and has been maintained beautifully so as to retain some of the architectural charm while still feeling relevant in our current era. If you find yourself down in New Orleans we strongly suggest checking it out. Beautiful chandelier on the ceiling of the Civic Theatre

The opener for Shpongle was Phutureprimitive, and we were blown away by the delicious dirty bass that made up his set. What was also unique about Phutureprimitive, aka Rain, was the way he made his music, which he describes as “dripping wet love drops of nasty mind melting sonic bliss”. In addition to the typical DJ equipment one would expect he had this orb with multiple glowing panels that made different sounds depending on what parts he touched. It was mind blowing, but not as mind blowing as what would end his set. Rain got on the mic for a few moments and spoke a Maya Angelou quote, reminding us to bring love back to wherever we were going. He had no idea that we were going back to Seattle the next day, but the words spoke truth to our hearts and we were very grateful for the timing. Fortunately we also got to meet him after the set and tell him this in person. Rain, one of the most gracious producers we’ve ever met

After a brief break, it was time for Shpongle. We had seen videos of Shpongle performances but had no idea what to expect of that night. All we knew was that we were in for an adventure, and how right we were! Shpongle took us on a trippy musical journey and the audience had a blast. There were LED hoopers and glovers and poi spinners in the crowd and it was quite a spectacle to see as he played his trippy sounds and spoke to us. This tour featured the Shpongletron 3.1, a glorious visual masterpiece with mapping by video artist Zebbler. Shpongle’s show is definitely a psychedelic trip whether you are on mild-altering substances or not, and the visuals made the perfect accompaniment to the sometimes eerie, sometimes invigorating sounds coming from his fingertips. 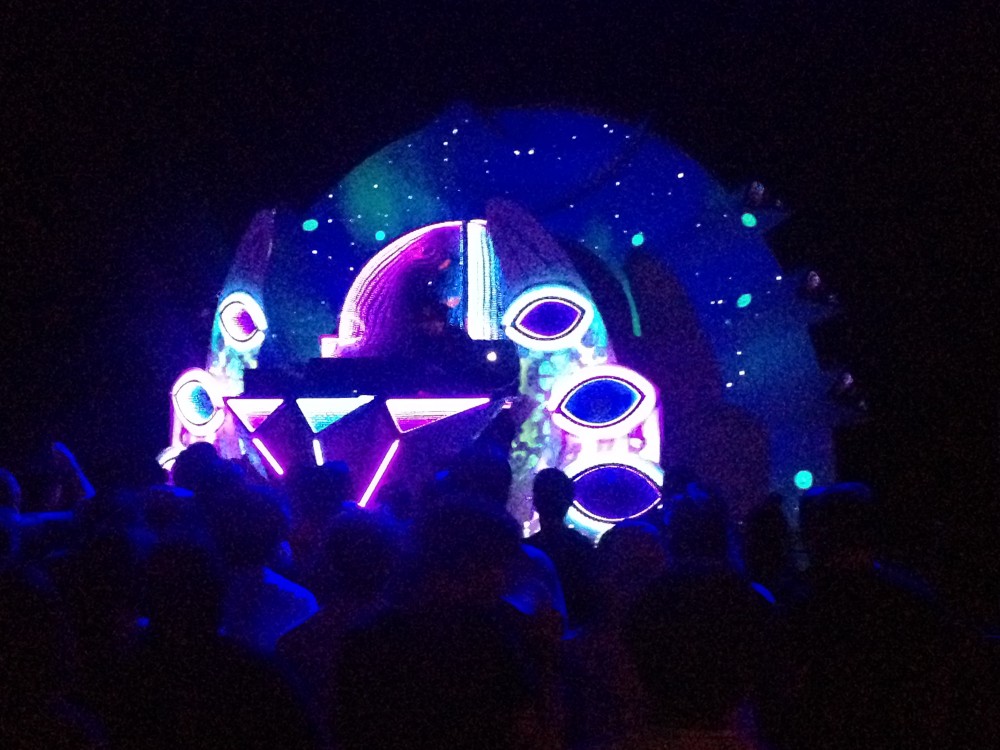 Before we knew it the show was over, and we walked out into the warm late winter air that hinted of even warmer Southern weather soon to come. If you were fortunate enough to catch Shpongle and Phutureprimitive on their recent tour stops throughout the Northwest we hope you enjoyed it. Their tour wraps up in early April, check and see if the Shpongletron 3.1 will be coming near you before it wraps up. We sincerely hope these guys make their way to Shambhala as it would be a perfect setting in which to experience the trippy bass goodness again. Have you experienced being Shpongled before? Let us know in the comments below, or on Twitter or Facebook!

4 Monday Mixes To Get You Through The Week Forecast For Seattle: Chance Of Rain DMNW On The Road: I Played In A Ball Pit At EDC Las Vegas DMNW On The Road: Getting Together in Vancouver for Trance Heaven DMNW on the Road: Ruby Skye Opens Its Doors to the Northwest