Connect with us
zoloft 100 mg no script and very cheap canadianpharmrx.com/buy-zoloft-online-cheap/

Need a little sunshine on this rainy January day? Pepe the Chihuahua stole our hearts and the #1 spot on our music videos of the week list with a stunning performance in Fiesta!

On the other hand, if dreaming about a dance party down under makes you even more depressed about the weather, we’ve got you covered. The rest of our list features laid back, moody videos perfectly suited for an “I’m not getting out of bed today” attitude.

– Pepe the Chihuahua (Played by Koko)

Spinnin’ Records, a Dutch label founded in 1999, was acquired by the Warner Music Group in 2017. Perhaps that explains why Spinnin’ Records music videos downright slap these days. This video for Mashd N Kutcher & Reece Low combines a cute chihuahua and clever concept to deliver content guaranteed to make you smile. By the time this sweet doggo takes over the DJ booth, the party has just begun.

If you’re unfamiliar with Mashd N Kutcher, the Australian based duo (Matt Minor and Adam Morris) brings together drums and piano to drop fast-paced, high energy dance tunes. Collaborating with Melbourne producer Reece Low brought a welcomed edge to the beat in Fiesta! If you’re looking for more of this unique Australian sound, search for “Melbourne Bounce” and you won’t be disappointed.

ATTLAS, also known as Jeff Hartford, explores reflective themes and carefully composed sonic elements in his progressive house music. Dreamy vocals by singer/songwriter MAYLYN pair perfectly with his beats. ATTLAS has been releasing music on the mou5trap label for several years now, and Hotel is no exception.

With mature visuals by the experimental artist Cyclo, it’s easy to lose yourself in this video. Something akin to jellyfish, lava lamps, and stardust, the animated artwork soothes and mesmerizes. Taking a moment to meditate on a sound, a picture, or a feeling can help you face the freezing, misty weather with a clear mind and an open heart. Settle in, and let this video take you for a short ride.

Remember how we said Spinnin’ Records is killing the music video game lately? Stealing another spot on the list, the lyric video for Not So Bad actually features some pretty stunning shots that perfectly capture the gloominess of both the song and the season. Let the post holiday blues rage full force when you watch this simple yet captivating video.

Oh and if the lyrics sound familiar, that’s because they’re from the famous early 2000s single Thank You by Dido. Reinvented by Eminem in 2009, Dido’s vocals also provided the eery backdrop for Stan, a song about a fan who loses touch with reality and meets a tragic end after obsessively seeking affirmation from Eminem. We love this electronic spin on a popular track, produced by Belgian DJ Yves V (Yves Van Geertsom) and Turkish talent Ilkay Sencan.

“Casilofi is the first electronic project I ever started in terms of producing my own music.”

Bitbird, an independent label founded in 2013, is the project of the Dutch music producer San Holo (Sander van Dijck). Their latest video reminds us that most famous electronic artists started as a virtually unknown bedroom producer. Shot in essentially one take, on a low resolution device, in a tiny kitchen, it captures the pure passion behind the image. And we can’t get enough.

If you missed San Holo’s music video for Lost Lately, grab a box of tissues before clicking that link. The video starts with footage of San visibly breaking down after a huge performance. Returning to a small room in a cramped back stage area, he collapses. The scripted video begins with him reawakening. He greets his beloved pet bird and steps out into the rolling green hillside. Intercut with home videos from his childhood, this video is the perfect counterpoint to the recently released music video for Layers.

In this article:Music Video, San Holo, Spinnin Records
Up Next: 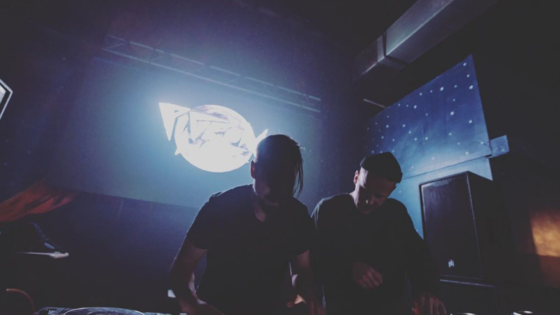