From his 2013 Paradiso set to this year’s appearance at EDC Las Vegas, Hugo Pierre Leclercq (better known as Madeon) has been amazing crowds and generating mass amounts of attention at a wild pace. Much to his fan’s excitement, he is only a mere 20 years old! That is saying something considering some of the accolades the young French producer already has under his belt, including such hits as Technicolor and The City, gracing the stages at some of the biggest festivals, and landing the #14 spot on Billboard’s “21 under 21.” Releases such as Cut The Kid and Imperium (his latest) continue to impress and add intrigue as fans impatiently wait for an impending album. Of course, there are a multitude of examples, songs, and videos to choose from that showcase his musical prowess, but to give you a good idea of the talent Madeon possesses, check out his EDC Las Vegas 2014 set and listen for yourself.

It’s easy to see why the future looks so bright for Madeon and why we are so excited for his return to the PNW! Portland is certainly in for a treat when he comes to town October 23rd during his tour, so don’t miss out on this opportunity if you are able to attend. While you’re at it, enter for a chance at free tickets to see him perform at the Roseland!

Enter for the chance to win a pair of tickets to Madeon! Use Punch Tab below to earn entries towards winning your way into the show! One winner will be selected and announced on October 22nd! Good luck!

In this article:Contest, Madeon, Roseland Theater
Up Next: 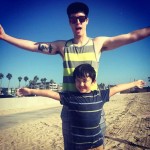 Bass enthusiasist, house addict, and lover of the Northwest and its growing dance music scene. Proud daddy of a growing boy with an appetite to match his own. New experiences are what life is all about Madeon announces ‘Good Faith’ tour with stops in the Northwest