No Vacancy: FreeLife Edition went off without a hitch this past Friday, January 16th at the Branx, featuring LA duo Bixel Boys. This was the 12th edition of No Vacancy and the 1st one of 2015. It was a great night with friends and phenomenal vibes that were present throughout the venue. Local talent set the mood for the entire night, with acts BennyRox, Night City and a special birthday set from Drexler. We could tell early on we were in for a treat.

Walking into the Branx on a very cold winter night, we stash our jackets at the coat check near the entrance. As we turn to the main floor, we see lights beaming, big screens, ravers mingling and Drexler owning the stage. With Goodlife Brewing and an open bar from 9pm-10pm, we couldn’t help but be there on time. Drexler, Night City and BennyRox kept the flow of energy and music high all the way, leading up to the main headliner of the night. The Bixel Boys, otherwise known as Ian Macpherson and Rob May,  are known for their underground big room beats. Since coming together in 2013, the duo have been nonstop, including an upcoming plan to play at Coachella. They electrified the crowd in every aspect the entire night, not giving anybody a chance to rest from dancing (that’s how we like it!) . They even invited the entire crowd on stage at the end of the night, to join them in singing  Waterfalls by TLC. It was quite a sight to see and an awesome way to end the night.

In this article:Bixel Boys, BRANX, No Va, Portland
Up Next: 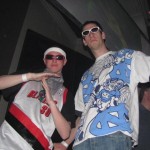 Love me some Electronic Dance Music.