Last Friday was another jam-packed night of dance for the Showbox Market, where Gramatik, with support from Haywyre and Balkan Bump, rocked the house on the last Pacific Northwest stop of their Re:Coil Tour.

Oakland native Balkan Bump opened the night with an eclectic range of sounds, complimented by his live trumpet playing. His experience as an ethnomusicologist (someone who studies music from the cultural and social aspects of the people who make it) is reflected his work. He is the pied piper taking you through a musical journey of exploration.

Picking up where Balkan Bump left off, Haywyre warmed up the crowd for Gramatik with groovy, bouncy beats just funky enough to lead us into the main set. The background visuals highlighted a live (we believe) video of Haywyre’s keyboard playing, and seeing the talent that delivers the sound makes it that much more special.

Gramatik took the stage third, but the crowd was still loaded with energy for the final set. The funky, gritty guitar sound delivered by live accompaniment drives people to truly “get down” to the beat. The venue was one big mob of bouncing and grooving. His sound ranged from light and jumpy lead-ins to deep and heavy bass.

As Gramatik works his funky magic on stage, sunglasses adorned, there isn’t a still body in the house – he really brings the party. Mixing in favorites from other great funk and bass artists, the crowd went wild when Griz’s Good Times Roll was featured. The whole venue was “na na na”-ing together in harmony.

Toward the end of the set, Balkan Bump joined back on stage to play and party along. The live trumpet perfectly complimented Gramatik’s beats and could be described in no other way but “sick.” It really was a treat.

There’s a reason he sells out shows, and Friday was no exception. We’re definitely not done with Gramatik, so hopefully we can catch him on the tour circuit this summer. Did you see him on one of his Pacific Northwest stops? Let us know in the comments below! 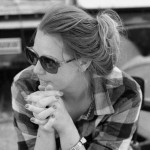